The aeronautical engineering units at Haberfield Public School are run as part of the Gifted Extension Program. The two units on offer are:

These units are run as pull-out, cross-grade ability groups for students working above their stage outcomes in science and technology and mathematics. They combine the disciplines of science, technology, engineering and mathematics (STEM).

In unit 1, the girls learn about the basic aeronautical principles including:

They then use this knowledge to experiment, design and test their own model gliders through project-based learning.

Unit 2 is designed to build on their prior knowledge and skills as they delve into the world of rocketry. The girls work in groups of 4 to complete a project-based learning task around bottle rockets. Their goal is to design a bottle rocket that can go the furthest distance, consistently.

To bring a real-world aspect to their learning, each team is entered into the aeronautical velocity challenge. Here the girls will compete against other teams from across the Sydney region with the goal of making it to the regional finals at Wollongong University.

As part of the competition, teams are given 40 minutes to construct their bottle rocket. They are then allowed two test launches before returning to the workroom to modify their rockets. With only 20 minutes to modify, the girls have to work quickly in order to be ready for the final launches. 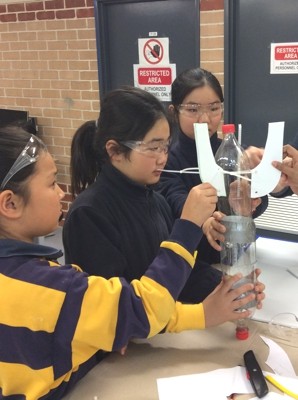 In 2017, we had two all-girls teams enter the competition. One in the Stage 2 division and one in the Stage 3 division. Both teams did exceptionally well on competition day, with their modifications leading to increased distance in the final round. The improvements in their prototypes from the first to the last launch highlights their ability to successfully embed the knowledge and skills of key aeronautical principles into their designs.

The girls who participate in these units also have the opportunity to refine their knowledge and skills during incursions and excursions.

The American Institute of Aeronautics and Astronautics

For the last 3 years, members of the Sydney branch of The American Institute of Aeronautics and Astronautics (AIAA) have come along and run hands-on workshops. In 2017, the girls in the rocketry unit worked with members of the AIAA to design, build and test a straw rocket.

For the last 2 years the girls in the rocketry unit have attended a hub day at the University of Western Sydney. During these days, the girls attend a lecture highlighting future careers in aeronautical industry as well as work in the university’s ‘maker space’. Last year, they designed and built their rockets in the centre for infrastructure engineering.

Return to top of page

We would like to pay our respects and acknowledge the traditional custodians of the land and also pay respect to Elders both past and present.

Copyright for this website is owned by the State of New South Wales through the Department of Education. For more information go to https://www.dec.nsw.gov.au/footer/copyright.